There are many options for PFAS testing, but only a few test methods have been validated by the EPA or DoD. Which one you choose depends on what you're testing for and why.

EPA test methods are broken down by matrix and designed to test for different PFAS compounds. Knowing what you need to test and why is vital.

The EPA has published three test methods that are finalized for the analysis of PFAS in drinking water.

Download a comparison of the compounds tested by method

Historically, EPA has focused on PFAS in drinking water. The agency has yet to finalize methods for other matrices, such as groundwater, soil, and emissions, despite the call for increased monitoring of these matrices. The DoD requirements for detection of PFAS (QSM Table B-15) use Isotope Dilution and are specified for use by some non-federal regulatory agencies. Until EPA finalizes methods for non-potable water and soil, laboratories are using versions of EPA 537 and QSM Table B-15 that include Isotope Dilution.

In 2019, EPA introduced SW-846 method 8327 for non-potable water. This method does not incorporate Isotope Dilution. It is also characterized as a screening test method by EPA and has yet to be finalized by the agency. EPA and DoD are developing another SW-846 method for definitive analysis of 40 PFAS compounds applicable to the following matrices: wastewater, soil/sediment, biosolids, groundwater, surface water, leachate, and fish tissue. This new method will incorporate Isotope Dilution and much of the same quality controls as currently included in the DoD QSM Table B-15. The multi-laboratory study is scheduled to commence in early 2021. The method, once the multi-lab study is complete, will first come out as an EPA Office of Water (OW) for consideration as a 1600-Series method, with anticipated documentation to facilitate rapid inclusion into SW-846. Pace is proud to be one of the select laboratories involved in this much-anticipated multi-lab study.

DoD has published its Quality Systems Manual (QSM) for Environmental Laboratories, the most recent version as of September 2020 being Version 5.3. The DoD QSM provides baseline requirements for the establishment and management of quality systems for laboratories performing analytical testing services for the DoD. Specific to PFAS testing, DoD documents in Table B-15 specific quality control requirements for “PFAS Using Liquid Chromatography Tandem Mass Spectrometry (LC/MS/MS) With Isotope Dilution or Internal Standard Quantification in Matrices Other Than Drinking Water.” Isotope dilution must be used for all compounds where a labeled analog is commercially available. Often referred to in the industry as being a “method,” it in fact is not a “method” but rather a series of strict quality control and technical requirements that must be followed by the laboratory.

Using these requirements, laboratories develop a DoD-specific method for use on DoD projects for non-potable water and solids. Notably, these same methods, either as-is or modified, are also used on Civil projects as being the gold standard for use on these same matrices in light of the fact that there is currently no final, published EPA methods for these matrices.

The DoD and EPA approved test methods are only designed to detect a mere 0.1% of the 4,700+ CAS-registered PFAS compounds. Although toxicity levels have yet to be determined for the vast majority of PFAS compounds, it is generally recognized that PFAS all share a similar structure and that the health risks associated with one PFAS are expected for other PFAS as well. Two methods have been developed to help detect these “non-targeted” PFAS compounds.

The Top (Total Oxidizable Precursor) Assay – The TOP assay oxidizes PFAA precursor compounds to turn them into detectable, terminal PFAAs. The increase in PFAAs measured after the TOP assay relative to pre-oxidation levels is a worst-case estimate of the total concentration of PFAA precursors present in a sample.

TOF relates to total organofluorine. The term “TOF” is widely used for this application. However, it is important to understand the difference between TOF vs. AOF vs. EOF. Notably, most of the method development work performed to date involves AOF (liquid) or EOF (solid). Pace Analytical® is also working on what it has deemed True TOF™, which is the simultaneous quantification of total fluorine and inorganic (free) fluoride to calculate the total organofluorine (TOF) content of a sample, without the need for adsorption or extraction. In all cases described above, the concept includes the quantification of the total organofluorine content of a sample, which allows for an enhanced understanding of the contribution of “non-targeted” PFAS compounds that may be in the sample.

Regardless of which method you choose, care must be taken to avoid contamination during sampling. Our PFAS Sampling Guide shares all the precautions Pace Analytical® takes to ensure accurate test results when collecting samples for our clients. 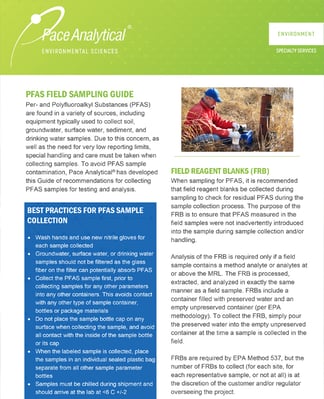 Take The Next Step

Pace Analytical® has been an industry leader in persistent organic pollutant testing for over three decades, and we were one of the first commercial laboratories to analyze for PFAS compounds.

Pace maintains certifications and accreditations in every state that offers or requires them. We're also certified/accredited by NELAC, ISO, the Department of Defense (DoD), and the Department of Energy (DOE).

The Pace Rapid Response Team can quickly respond to any emergency. Our team will coordinate sample container delivery, assist with technical information needed onsite, and ensure samples are delivered as quickly as possible to the appropriate Pace laboratory. In many cases, we can provide PFAS results in as little as 24 hours.

Our mobile lab is the only certified mobile lab in the industry capable of analyzing PFAS in the single-digit, parts-per-trillion range. This lab can identify PFAS plumes and source areas and provide fully defensible data, often with same-day results and at a lower cost than expedited services at other labs.

How PFAS can effect: